Postcard from the edge 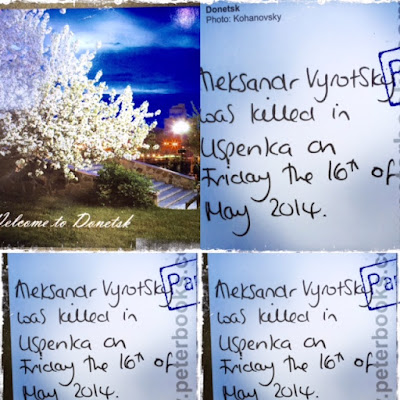 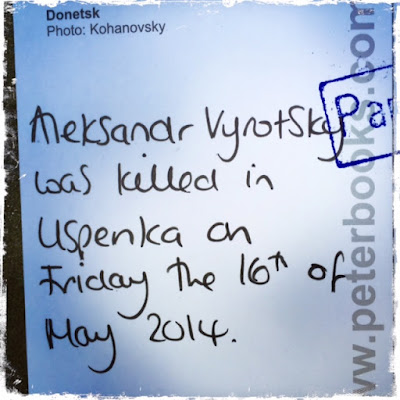 Photographer Anastasia Taylor-Lind is doing something that
caught my eye. She has been working in the Ukraine documenting
the conflict there (remember that one). To bring attention to it
she is sending postcards. So I sent her my address and she mailed
this postcard to me. It's pretty ordinary -- a city scene of Donetsk
in the evening. But its note is part of an ongoing sadness connected
to the war.

I was moved by the tension between the image and the information,
though I know very little about the situation in the Ukraine. A bit
of research provided some background for this poem.

FROM ABC NEWS 2014
In Donetsk, about 100 troops of the self-styled separatist Donetsk People's Republic took an oath of an allegiance, in an apparent sign of defiance to Mr Porosheko's peace plan. In a ceremony on the town's Lenin Square, armed fighters, some wearing face masks, pledged they would "defend the Donetsk People's Republic to the last drop of blood."
Alexei, a miner, said he decided to take up arms last week. "I am 43. I have children. I had a job but I dropped everything to defend the homeland," he said.

like thunder storms as my day accumulated
its usual list – noisy, mundane – Trump is at it again

I could go on and on about things
the stories, news, the sunsets

when you left emboldened
by face-mask and gun

While the miner quoted in the news report isn't
Aleksandr Vyrotsky, I wonder about both their stories,
think of their families. The Irish poet Seamus Heaney
argued rightly that a poem never stopped a tank
but I like to think perhaps a poem, like a photograph
or a postcard, can inspire the person
who eventually walks to the middle of the road.