To exist wholly in another, seamless,
mirrored. Think of the hive,

at each turn we find ourselves, not
a version, not a replica,
but our whole selves. Love,

you claim, comes close to this,
no space,

between your words, a hand

over the other's heart. How do you live
with this distance? I have you, she
thinks, or, I know you,

but she can never say, I am you. When you see us swarm--rustle of

wingbeat, collapsed air--your mind
tries to make us one, a common

intelligence, a single spirit un-
tethered. You imagine us merely
searching out the next

that could contain us, as if the hive
were just another jar. You try

to hold the ending, this
unspooling, make it either

zero or many, lack

or flurry. I was born
you begin, & already each word
makes you smaller. Look at this field--

into a thousand versions of yourself.

You can't tell your stories fast enough.
The answer is not one, but also 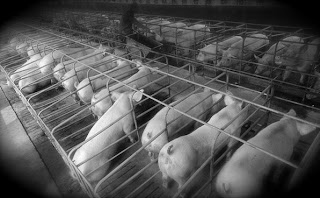 as in an economy of
The first week or so of submissions for the upcoming issue on "economy" for qarrtsiluni has offered up a range of work -- from flash fiction to photography. And I've been reading and grading papers and portfolios -- so my eyes are watery with words.  Plus I decided to look at Nick Flynn's collection Blind Huber for a way into a project of poems I started during the days of napowrimo. His is a book of poems on bees and a blind 19th century expert. I'd read it and heard him read from it years ago, then it occured to me that book could offer a path into the poems I drafted.
Here's a poem selected as one of the Discovery winners.
Repercussions of the Current Import/Export Ratio
By Jynne Dilling Martin
They smuggled turnip seeds into the new world by
sewing them in a hem. Welcome, the customs official said.
There is a mystery about people when they leave us: how does a
skipped stone pick the moment to sink?
A donkey drags a plow through the dirt. Later in life at the circus he
will learn to do mathematics with his hoof,
stomp out answers to questions of addition and subtraction,
astonish crowds with his understanding of these problems.  I draw
images of who I used to be and drown them in the lake;
I bind them to rocks to prevent them from ever resurfacing.
The customs official sinks crates of contraband into the sea
and wonders where each bullet might have been bound;
the fireworks he hides and explodes the following summer,
his face becoming the strangest colors beneath the bursts.
The snake crawling out of her skin pulls it inside out
like a nylon stocking: I wonder who would recognize me now.
Sometimes seeds lodge deep in clothing and years later sprout
out of gravesites and dresser drawers, turnips for lunch,
turnips for soups, turnips for dinner. I asked the donkey the odds
you'll ever come back. I waited for his leg to lift.
Posted by Pam at 3:44 PM No comments: 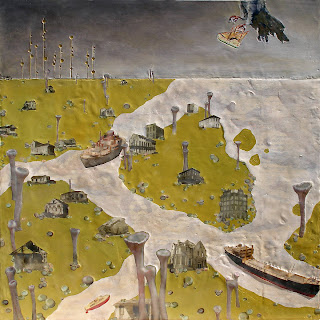 ECONOMY
Economy has its roots in Greek — oikos and nomos — meaning the principles necessary to maintain the household. It’s a thoughtful word. The study of economics, until the 18th century, was a branch of philosophy.

And it’s the word of the moment. It dominates the evening news. It’s determining how we spend or save; whether we remain in our homes, keep our jobs. It has governments around the globe cutting, bailing and re-thinking spending plans. It’s full of associations: think Wall Street bull or bear or greed. Think sub prime mortgage. Then there’s the technical jargon: quantitative easing, collateralized debt obligation and the fallacy of composition all seem ready for metaphor.

With this in mind, we urge you to think broadly, associatively and imaginatively about this touchstone word. Consider economy of movement, expression or effort. Think fuel, cash or gift economy. In your investigation, remember the epigram and the epitaph, both concerned with the economics of composition. Think about how the subject might inform style, as well as content.

However, don’t be burdened by the word’s current negative connotations. For Hannah More, a 19th century British religious writer and philanthropist, the word resounded with hope. She described “the economy of the heart, which saves the expense of anger, the cost of hatred, the waste of spirits.”