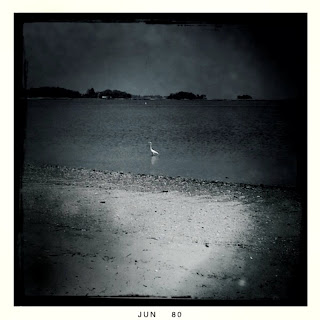 It will take a good fight to bring her back
and the chief there orders his men to call
her in with conch shells, even if it means love

or staying on the beach when the sand hardens.
There’s the chance she’ll float like Olofat
who spat blood and broke himself

into an archipelago. There’s the chance
she drank the sweet water in Tol
and poured her body out as a spring.

There’s the half-caste joke about the men
who left the lighthouse years ago.
No one can discuss sunsets or the fiberglass

of the boat or the story about her breasts
bloating later in the shape of an island,
into real rock. A bulletin goes out

and the boys climb trees for signals.
It could be days she stays huddled there,
and the oddsmakers on Saipan

place their faith in the fish she might spear.
Big deal some say, remember when the cliff
had imprints of hands, and the sliding streaks

of Sudal. There’s the chance she’s stuck
in a tunnel of coral or torn to tufts
and in that case the son could start killing

the pigs. She left the Mortlocks at night
and now the women cover the fences
with fronds and start with the baskets.

There’s the hope she’ll drift again as scraps
of land, as the upper half of a woman’s body,
the curve of sand in her neck.

Thanks to Matt Nienow for finding this poem.

I was at the beach today. I'm still here I think. Or there. 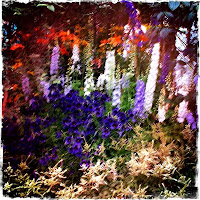 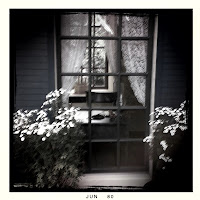 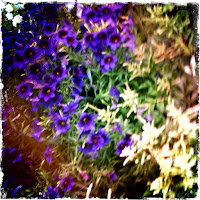 Up at BigCityLit
Photos from the exhibition at the NY
Botanical Garden on Emily Dickinson's
garden. I read some of her poems there Saturday.
Poems on death, bees and roses, my favorite topics.
Posted by Pam at 10:41 PM 2 comments: