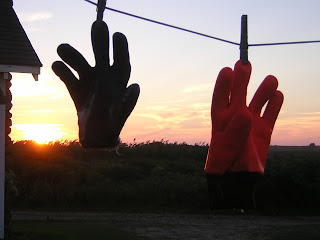 Did she say who sought refuge
in unhappy love

Slight accent, and the falling
"Leave a window open"


"Which of these is life? the true life?"


It's meant to be sad and bright, lit up
like the boat of the dead

I thought 2 hands would be 2 people.

--Kate Greenstreet
"Which of these is life? the true life" Paula Modersohn-Becker, The Letters and Journals

I'm re-reading case sensitive by Kate Greenstreet, or at least I'm re-reading it by skipping around and looking again at the poems in a kind of random way to see how they stand. At the same time I'm also reading a great book called The Unfolding of Language, which looks at the "invention" of language, though the author maintains that language wasn't actually invented but keeps happening and is always in process as it continues to change -- new words are added, tenses die out, cases disappear over time. I haven't exactly found the direct connection between the books. Maybe one will teach me about the other. Lately, it occurs to me that language works like human nature in that factors like survival, convenience, necessity, beauty, hunger,desire -- impact language's process the way they impact people and our interactions. The other thing on my mind as I read Greenstreet is story-making, story-telling. I guess I have been obsessed with narrative as a writer for a long time -- primarily because I'm no good at plot. It seems to me that stuff happens in a kind of fragmented way and later we make a story out of events to help us make sense of it all, to understand why we did certain things or behaved in a particular way. And then we turn to myth, to religion, to psychology, to art even. Or we make a mythology out of our lives so that we can believe there was a reason for the choices we made. Wasn't it Stanley Kunitz who said we should make a mythology of our lives?

How I Became Impossible


I was born shy, congenitally unable to do anything
profitable, to see anything in color, to love plums,
with a marked aversion to traveling around the room,
which is perfectly normal in infants.
Who wrote this? were my first words.
I did not liked to be torched.
More snow fell than was able to melt,
I became green-eyed and in due time traveled
to other countries where I formed opinions
on hard, cold, shiny objects and soft, warm
nappy things. Late in life I began to develop
a passion for persimmons and was absolutely delighted
when a postcard arrived for the recently departed.
I became recalcitrant, spending more and more time
with my rowboat. All my life I thought polar bears
and penguins grew up together playing side by side
on the ice, sharing the same vista, bits of blubber
and innocent lore. One day I read a scientific journal:
there are no penguins at one pole, no bears
on the other. These two, who were so long intimates
in my mind, began to drift apart, each on his own floe,
far out into the glacial seas. I realized I was becoming
impossible, more and more impossible,
and that one day it really would be true.

-Mary Ruefle
Posted by Pam at 7:47 PM No comments:

Mary Ruefle's book A Little White Shadow has been sitting with me, especially since the snowfall. How bright the world looks in snow. Even as it covers the imperfections of the fall, what remains stands out, which is kind of what occurs in this small book. Page after page has been whited out except for a few words, a fragment here, a micro-thought there. She has taken a book (though there's not an author's note, you discern this from the copyright info) published in 1889, as it says on the frontispiece, "for the Benefit of a Summer Home for Working Girls," and gone through each page with great intention and even narrative thrust and wiped out most of the text. A new story is made through erasure. It's not a poem, although in its spareness it has poem-like qualities. Plus, the appearance of the whiteout gives the pages a painterly quality.There's the shadow of words under the whiteout. The rough whiteout has texture. It's like looking at small rectangular prints. And the bits of remaindered words read like Zen death poems -- as in this excerpt:

and this several pages later:

in black velvet
the last one
he wrote when quite an old man
Ren-
dered into English
this was something of its meaning:
paper
on
fire

There are characters and places but these are mentioned in passing almost, as if you already know the story, the people. Like what's under the snow. You imagine what you can't see, make up your own story for the white space, fill the white out. Or not.

Agnes Agnes
the stern sad problems of human
existence
has its pauses. One must have a mind of winter
To regard the frost and the boughs
Of the pine-trees crusted with snow;

And have been cold a long time
To behold the junipers shagged with ice,
The spruces rough in the distant glitter

For the listener, who listens in the snow,
And, nothing himself, beholds
Nothing that is not there and the nothing that is.
Wallace Stevens

It was like copying down a poem someone was whispering in his ear, but he gave the words on the page his full attention nevertheless. Because he'd never written a poem like this, in one flash of inspiration, without stopping, there was a corner of his mind where he doubted its worth. But as line followed line, it seemed to him that the poem was perfect in every way, which made his joyful heart beat faster. And so he carried on writing, hardly pausing at all, leaving spaces only here and there for the words he had not quite heard, until he had written thirty-four lines.

The poem was made up of the many thoughts that had come to him all at once a short while earlier: the falling snow, cemetaries, the black dog running happily around the station building, an assortment of childhood memories...He called the poem "Snow."

Much later, when he thought about how he'd written this poem, he had a vision of a snowflake; this snowflake, he decided, was his life writ small; the poem that had unlocked the meaning of his life, he now saw sitting at its center. 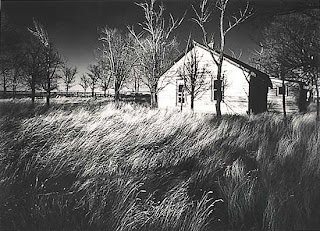 Too long away after hardly having begun, frustrated by lack of techno know-how.
But this from Mary Ruefle's book/poem of erasure A Little White Shadow, some excepts:

the
number
blue,
encircled herself


think me
lazy
always idle; but
my brain
grows weary just thinking how to make

I think about Ann Carson's rendition/translation of Sappho, If Not Winter, which makes me think about appropriation and an article I'm reading now in Harper's about plagiarism and appropriation and the broad plain in the middle. "Invention," writes author Jonathan Lethem, "does not consist in creating out of void but out of chaos."