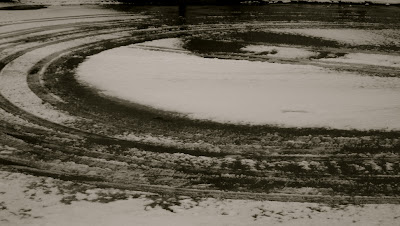 Snow fall/ house bound/ mind stuck --
spondaic phrases tromping about in my wintered brain, which is now officially done with snow scenes (we'll see). But the snow has provided time to finish The Sound and the Fury. To think as well about how, in previous readings, Benjy's section grabbed so much of my imagination and memory that I had hardly recalled the obnoxious Jason.  Perhaps there was something new and daring (to the teenage reader at least) about that first narrative, an introduction to the idea of stream of consciousness. Imitation of that style was definitely something I recall attempting. So this is the gift of re-reading. I recall hearing that the great New Yorker magazine writer Joseph Mitchell read Joyce's Ulysses once a year. How much he must have learned returning to that epic annually! An ongoing conversation with the self, with the book's characters and their travels and travails.
But do you sacrifice reading other books in taking on such a burden? What gets crossed off the list? What book would you read once a year?
Posted by Pam at 6:00 PM

Email ThisBlogThis!Share to TwitterShare to FacebookShare to Pinterest
Labels: The Sound and the Fury

I'm not sure I would read any book once a year, but I've read The Scarlet Letter at three very different phases in my life, finding it stood the test of time and still impressed me in varying ways. I should revisit Faulkner's books...I wonder if I would still love his writing? Have you read his poetry? Deadly. I did a big paper entitled William Faulkner: Failed Poet, based on The Marble Faun. A daunting challenge...it just about did me in.

I've not read Faulkner's poetry, though it doesn't surprise me that it wouldn't be as strong as his fiction. Didn't Hawthorne also write about the Marble Faun?
I'm going to think more about what book I'd find worthy of an annual read.

Let me know what you come up with. I want to reread One Hundred Years of Solitude...I bought a hardcover copy to savor a few years ago.

That's a great choice Christine. I've been meaning to re read it too though with a bit of reluctance--what if it isn't as magically incredible as the first time! But that's one on my re-reading shelf.