Address needed/books in mail on Monday.
Congrats and thanks all for participating!
Posted by Pam at 11:33 PM 1 comment: 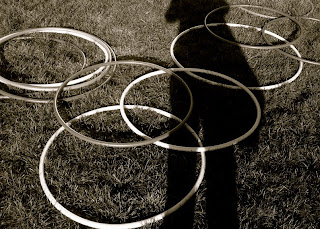 I thought a lot about vanishing anyway.
My profession is about having an effect
on people by making sentences.
A real moment of exhilaration came
when I discovered staples.
Overtakelessness.
I wanted to fill my elegy with light
of all kinds. But death makes us stingy.
Helplessness built a wall in her.
Prowling the meanings of a word,
prowling the history of a person,
no use expecting a flood of light.
But all those little kidnaps in the dark.

Anne Carson read from her new book,
Nox, an elegy to her brother who died.
She calls it, "an epitaph in the form of a book."
I went to Poets House in New York, an amazing
place near the foot of Manhattan.
Here is Carson's translation of a poem
by Catullus that she says has been with her
since high school -- #101. He wrote it
as an elegy to his brother.

Many the peoples many the oceans I crossed--
I arrive at these poor, brother, burials
so I could give you the last gift owed to death
and talk (why?) with mute ash.
Now that Fortune tore you from me, you
oh poor (wrongly) brother (wrongly) taken from me,
now still anyway this -- what a distant mood of parents
handed down as the sad gift for burials -
accept! soaked with tears of a brother
and into forever, brother, farewell and farewell

This video is making the rounds. It brought a little lift
to another rainy chilly day. Only a few days left to join
in my poetry giveaway. Come on, add your name, you
know you want to!
Posted by Pam at 12:42 PM No comments:

Poetry is the journal of a sea animal
living on land, wanting to fly in the air.

The Poetry Book Giveaway is happening here.
Send me your name and email -- you have
until April 30. Then on May 1 I will select
at random one name and mail you one
copy of the above books, postage paid!
And the winner will actually receive eight,
yes, EIGHT chapbooks for free. That's because
Toadlily Press features the Quartet Series,
four chaps under one roof. My chapbook,
The End of the Body, is part of The Fifth
Voice. Such a deal.
Posted by Pam at 1:18 PM 3 comments: This image haunts me. From a book out this month by Siglio Press, The Torture of Women,
a series of paintings made by Nancy Spero in the 1970s. I bet the book is expensive.
I need to learn more about this artist. (I like that the word haunt is etymologically
related to home.)
Posted by Pam at 5:12 PM 1 comment:

Email ThisBlogThis!Share to TwitterShare to FacebookShare to Pinterest
Labels: MoMA

I've been hemming and hawing. What if no one is out there. What if no one signs up. I missed the deadline, proscrastinator. Then a note on Kelli Russell Agodon's blog that there's still room. A sign. I'm in! And thanks to Kelli for this great idea. Participating bloggers give away two books, their own and one other. The winner will receive my chapbook, The End of the Body, which is part of The Fifth Voice, published by Toadlily Press in its Quartet Series. The other is a favorite (also out from Toadlily Press), By Way Of. It features chaps by 4 poets: Diana Alvarez, Emily Carr, Matthew Nienow and Diana Woodcock.
Check out the Toadlily website for more info. To enter, leave a comment with your name on this post letting me know you're interested. You have until April 30. Then on May 1, I'll randomly select a name and ship the books (postage on me) to the winner. It's that easy.