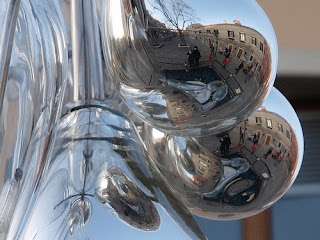 In the Room of Glass Breasts
By Brenda Hillman

Around each word we're hearing,
there spins an original flame;
the unborn wait in a circle of commas,
upright robins wheel to Wheeler
& termites with arms in their heads
dig under the chairs—

It is impossible to describe the world;
that's why you get so sleepy listening to poetry.
The writer skates but spring takes
the gold (ooo don't let her fall in sequins)—dusk
buzzes in its meaning kit...

maybe you drank too much but that's not it:
the sexy cadence puzzled everyone.
You were drawn to poetry by something nothing
satisfies but poetry: boundless sensation,
an abstract tone—
then one day, two normal words
had made you weep: Unreal...City.... Not
mostly; mostly they didn't make you weep, but still:
Unreal... (then that big pause:)...
City.... Look at that slumped
italic guy over there, waiting to be in a stanza:
Sat low our lord of literature
for he was very tired—

Outside the room, the spell ends,
the vowel of an owl/the owl of a vowel
dives onto a warm body, the ruined gardens
of the state, tended by the great dead—
You were called by a silence you can't understand.
You're grown up now. You can read all night
if you want in the bride's bed— 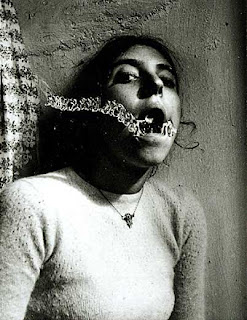 The brain is on my mind. Trauma and otherwise.
Saw this movie coincidently last night. Go see it.
Netflix it if possible or whatever. Weirdly wonderful.
Posted by Pam at 6:30 PM 2 comments: 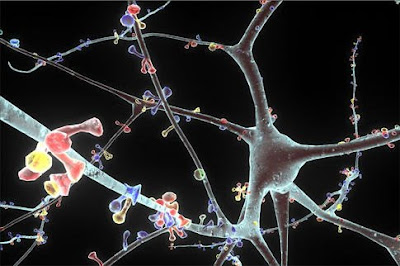 The past few days I've been thinking alot about Tucson,
the city where my grandparents, cousins
and other family have lived.
About the saguaro cactus, Mt. Lemmon hummingbirds
and the White Dove of the Desert,
Mission San Xavier del Bac. My grandfather sketched
and painted the church throughout his life.
My grandmother's piano music, the quaver of her voice
as she sang Alice Blue Gown. Her guest room where I
stayed for awhile after leaving college.
The bar downtown where my cowboy uncle
treated me and my friend to whiskey shots.
The Medical Center, where my brother's
life was saved after the accident
that left part of his brain on a pavement
outside the university's football stadium.
Perhaps it's Tucson that bears some
responsibility for my turning to poetry.
After my brother's accident, I struggled
with the idea of plot.
When the fraternity brothers overstuffed
their cannon at game's end so that it
exploded and shattered, shrapnel
tearing into my brother's brain,
the randomness/ its aftermath/ left me unable
to see story. The construction of a novel,
which I'd thought a calling, seemed impossible.
Then stumbling into poetry, the comfort/excitement
in poets like Olds and Graham.
Why worry about storyline, character development,
cause-effect. Poems could be a container
for the non sequitur fragment,
the fracturing of narrative and family.
How incredible to shed those constraints,
which I wasn't much good at anyway.
My ties to the city are mostly gone,
as relatives have died or moved. I haven't visited
Tucson in years. The last time was with my own
young family. There were bees and big dogs
at my aunt's house. My grandmother sang
to us. The downtown was faded. New
developments and mini malls
sprawling/crowding the cactus, coyotes and
road runners. From Tucson, we headed north
to Phoenix and the Grand Canyon, the Painted
Desert and petrified forest, to Flagstaff and
Lake Powell, and Sedona. We stopped at Orabi
where I bought a pair of silver earrings that had
chips of coral in their watery design.
This isn't in order. I don't recall the map
or how we drove. The kids were in the back
of the small rental separated
by a cooler of food and we drove through high
desert country, went fishing and hiking,
spit into the Grand Canyon, headed back
to Tucson before flying east.
I'm not saying anything about the shooter
and what he did and Tucson and I'm not
connecting my brother's accident
to why I write poetry, which is as much
about lack of endurance as it
is about Tucson or the ocean and how
I'm distractable. Plus I like words more
than sentences sometimes.
There's no narrative thread here.
You know that.
Posted by Pam at 6:25 PM No comments: