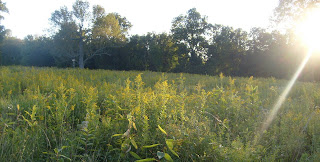 as if it were a scene made-up by the mind,
that is not mine, but is a made place,

that is mine, it is so near to the heart,
an eternal pasture folded in all thought
so that there is a hall therein

that is a made place, created by light
wherefrom the shadows that are forms fall.

Wherefrom fall all architectures I am
I say are likenesses of the First Beloved
whose flowers are flames lit to the Lady.

She it is Queen Under The Hill
whose hosts are a disturbance of words within words
that is a field folded.

whose secret we see in a children's game
of ring a round of roses told.

Often I am permitted to return to a meadow
as if it were a given property of the mind
that certain bounds hold against chaos,

that is a place of first permission,
everlasting omen of what is.


I admit to having a thing about meadows, fields. This evening I went for a walk in one of my favorite fields. The air was cooling off. A breeze stalked me and I let it get snagged in my hair. There was a kind of returning, when I returned to this place "of first permission," the field folding into me.
Posted by Pam at 10:07 PM

I'm with you, Pam. Loved what you said. And I'm savoring Duncan's "...a disturbance of words within words / that is a field folded." At the reservation this week, I watched the wind comb patterns in the tall grass, creating waves of mauve iridescence in the same beautiful "hour before the sun's going down." Mesmerized, soothed, open to the shifting light.

The light at the reservation is intense this time of year, especially toward the end of the day. Duncan's poem is one of my favorites.